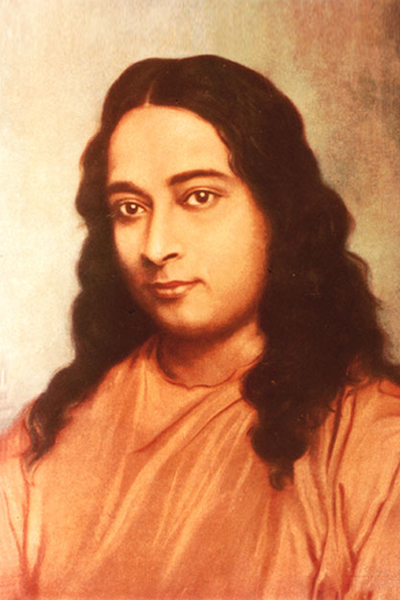 The prophecy of Lahiri Mahashaya came true when Mukunda Lal Ghosh was born to Gyana Prabha and Bhagabati Charan Ghosh on January 5, 1893. Mukunda would later become adored worldwide as Paramahamsa Yogananda, a prophet for people stuck in the mire of delusion. An outpouring of Mukunda's unquenched thirst and unmitigated love for God surged so intensely in him, even in his early childhood, that he posted letters to God in heaven earnestly waiting for His reply. Groomed and bred on the anvil of the saintly care of his pious parents, the spiritual spark in him grew day by day until it became an all-radiant and effulgent light.

His strong and indomitable willpower, dynamic personality, divine love, and high state of spiritual experience enabled him to be a spiritual beacon, blazing the path of Kriya Yoga for millions of people in the West. That he was divinely ordained to do so was evidenced by the prophecy of Swami Vivekananda: “I have laid the foundation of spiritualism, but after me a mahayogi will come who will teach you how to realize God through yoga.” Yoganandaji's use of language in both his speeches and writings was so forceful that others could easily perceive the miraculous play of gurus and God within him. He blended Swami Vivekananda's clarity, Shankaracharya's wisdom, and Chaitanya's love.

After a decade and a half of ceaseless spiritual work in the USA, Yoganandaji retuned to India in 1935 to the unspeakable exhilaration of his beloved Gurudev. During his stay, many great personalities such as Ramana Maharshi, Anandamoyee Ma, Kashimoni Devi, the saintly wife of Shyamacharan, and Mahatma Gandhi came in contact with him. Understanding the significance and universality of Kriya Yoga as the scientific foundation of all religions, Mahatma Gandhi and his disciples in Wardha Ashram took initiation from him in 1935. During his stay in Kolkata, Paramahamsa Hariharananda took initiation into second Kriya from him. His Gurudev Shriyukteshwarji bestowed on him the highest monastic title of paramahamsa during this period.

When Yoganandaji was at the Kumbha Mela, he received several urgent calls from his Gurudev to return immediately to Puri. Unfortunately, Paramahamsa Yogananda planned to combine his return to Puri with the foundation day of Puri Karar Ashram on the 22nd of March, the Vernal Equinox Day. Delaying his journey back to Puri caused him to miss the conscious departure of his beloved Gurudev on March 9. It is very difficult to describe the bereavement of a realized yogi who loses the physical company and guidance of his Gurudev. A mesmerizing and miraculous rendezvous with his beloved Gurudev took place some days later at the Regent Hotel in Mumbai on the eve of Yoganandaji's return to the West. Shriyukteshwarji materialized in blood and flesh before Yoganandaji and gave a thrilling account of his sojourn in hiranyaloka.

Yoganandaji's life was eventful, miraculous, monumental, and epoch-making. On October 6, 1951, he wrote to Paramahamsa Hariharananda, “My life is a whirlwind of activity and struggle with work.” A gifted orator and singer, he inundated the hearts of millions with the water of divine love. His published books, such as The Autobiography of a Yogi, Whispers From Eternity, The Divine Romance, and Science of Religion, stand as a glowing testimony to his boundless brilliance, erudition, and experience with the Self. On March 7, 1952, when a banquet was given for his Excellency Mr. Binay R. Sen, former Ambassador from India to the USA, Yoganandaji, in midst of his speech, with a blessed smile, attainedmahasamadhi to the amazement and stunning silence of all singing a beautiful song in paeans of India's eternal glory:

'Where Ganges, woods, Himalayan caves, and men dream of God;
I am hallowed, my body touched that sod.'

The mysterious event of his physical body remaining ensconced in eternal peace without the faintest shred of evidence of decomposition for twenty days leaves us awestruck and inspires us to experience the deathless state.