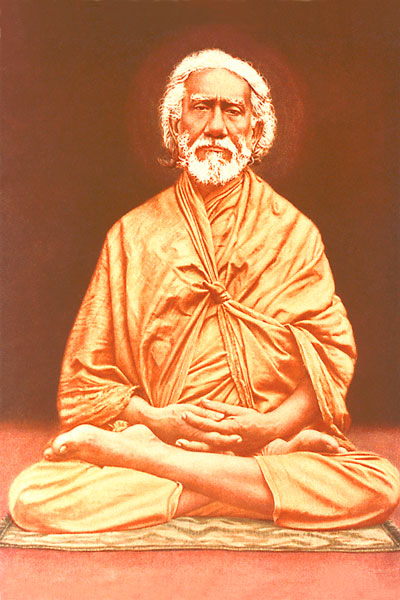 A worthy disciple of Lahiri Mahashaya, Priyanath Karar, constantly absorbed in God consciousness, deep in the shambhavi state, and introverted, was none other than the world renowned Swami Shriyukteshwar Giri.

What ancient sages and saints had practiced and put into scriptures, he translated in his own life by passing through all the four ashramas (stages) of Hindu life: brahmacharya(celibacy), grihastha (householder, family life), vanaprastha (life of seclusion), andsannyasa (renunciation) with achievement of four purusarthas: dharma, artha, kama, andmoksha to mark his illustrious life as complete and all perfect.

Swami Shriyukteshwar Giri was born to a disciplined, punctilious, and diligent landowner father, Kshetranath Karar, and a devout, pious, and pure mother, Kadambini Devi, on the tenth of May, 1855 in Serampore on the banks of the holy river Ganga. Originally named Priyanath Karar, he was brilliant, inquisitive, fearless, bold, highly spiritual, reasonable, and logical from his very childhood. His innate, deep-rooted tendency to quest inwardly and his unquenchable thirst for knowledge helped him pass all his school examinations successfully and then attend college and medical school.

After the death of his father, under the guidance of his God-conscious mother, he married according to his mother's wish. Despite his many achievements, his family life, his medical knowledge, his mastery of astronomy and astrology, and his knowledge of many languages, including English, French, Hindi, Bengali, and Sanskrit, he still thirsted for something more. An intense desire for God-realization drove him to visit sages and saints. His quest remained unanswered until he met Shri Shyamacharan Lahiri Mahashaya in Kashi (Benares) and became his disciple. From the auspicious day of his initiation into Kriya Yoga, Priyanath devoted himself sincerely to meditation and Kriya practice in close correspondence and company with Lahiri Mahashaya. He was so dear to Lahiri Mahashaya’s heart and mind that Lahiri Mahashaya addressed him as Priya (loved one) to show his special affection for him.

Upon returning to Serampore from the Kumbha Mela, he started the holy project, as directed by Babaji Maharaj, of writing a synthesis between Western philosophy and Eastern mysticism. He soon completed the work titled Kaivalya Darshana (The Holy Science), and Babaji Maharaj, as promised, privileged Priyanath with his darshan when he was coming out from his bath in the river Ganga after meditating the whole night. Babaji Maharaj declined visiting the ashram even with Priyanath's heart moistening entreaties. The elation he had while rushing to the ashram and returning with milk and fruits to offer to Babaji Maharaj soon withered away when he found Babaji no more, and in great wrath he threw them away. This fury of anger did not remain hidden from Babaji Maharaj. On the occasion of his meeting with Babaji Maharaj in Lahiri Mahashaya's house, the great master admonished him not to be angry and show conceit.

On March 22, 1903, the day of Vernal Equinox according to Priyanath’s cosmic astrology, not the conventional April 13 or 14, he established a hermitage named Karar Ashram in Puri Nilachaladham and adjacent to the seashore. It was a milestone in the history of Kriya Yoga. Brought from the labyrinthine caverns of the Himalayas to the plains by his master, Yogiraj Shyamacharan Lahiri Mahashaya, Kriya Yoga was spread by his worthy disciple Shriyukteshwarji to mingle with the infinite ocean.

As revealed beforehand to his disciple Narayan, Swami Shriyukteshwar entered intomahasamadhi on the 9th of March, 1936, in Puri Karar Ashram. A worthy disciple can be a worthy master. He produced many worthy God-realized and world-renowned disciples such as Paramahamsa Yogananda and Paramahamsa Hariharananda, who successfully fructified their master's dream by spreading Kriya Yoga to every nook and corner of the world. The stunning account of his resurrection before Yoganandaji in a Mumbai hotel after his mahasamadhi, narrating his sojourn in hiranyaloka, and appearing before Paramahamsa Hariharananda and other disciples many times, fills devotees with spiritual vibrations. His five quintessential nuances — self-control, steadiness in spiritual practice, deep scriptural insight, self-surrender, and strict discipline — remain as priceless treasures for Kriya practitioners wishing to ascend to the Ultimate.