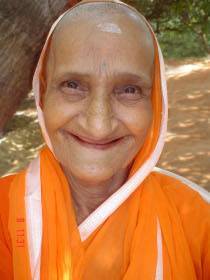 Swami Amrutananda Giri, affectionately called Aee (Grand Maa), was not only a loving person but also a great living encyclopedia of Odia literature. She lived a long life of about 85 years.

After donating her property she lived as a vanaprasthi. Then both the aunt and niece took sannyas diksha (monk initiation) from Prajnananandaji Maharaj at Hariharananda Gurukulam on the holy day of Guru Purnima in 2007. The niece became known as Swami Gurupremananda Giri and the aunt as Swami Amrutananda Giri. Together they spent a lot of lovely time with disciples, ashramites, brahmacharis, and sannyasis at Hariharananda Gurukulam. Disciples used to go to them to talk and eat something.

Swami Amrutananda Ma had a humorous personality. We often noticed that after a person with a gloomy face met her, he or she would return with a smiling face. Her sweet, heartwarming smile made everyone smile. She had a special love for plants and animals. The ashram swans and stray dogs and cats received their share of food from her every day. Whenever she called a cat that she loved, it would jump up and give a peck on her cheek. These are just a few examples of how much love and amity she had.

She was a great lover of cooking. She used to cook various delicious items and serve the ashramites and guests. She was also a great lover of books and would recite couplets from the Bhagavatam and poetic works of saints for hours every day. This was a great inspiration to all of us. Anyone who met her returned with some food, love, jnana, and bhakti with a smile.

Our beloved Swami Amrutananda Ma went back to the abode of God at 9:17 a.m. on Friday, August 16, 2013 in Cuttack, Odisha. Her body was taken to Balashram, in the village of Arua where she lived most of her life. Her body will be given bhu samadhi (burial) in the Gurukulam on August 17. The shodashi bhandara (a special celebration for departed monks on the sixteenth day) will take place on August 31.

We will miss her smiling, humorous face in the ashram.