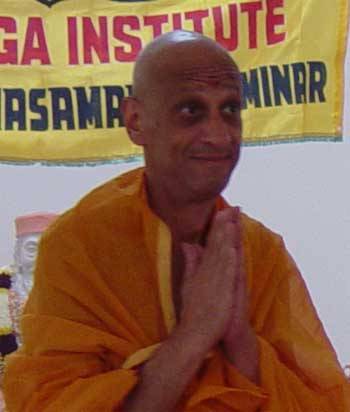 Swami Divyananda Giri (previously known as Michael Tobe) was one of Paramahamsa Hariharananda’s first New York center leaders. At the end of 2004, having terminal cancer his desire was to become a renunciabt. He asked Paramahamsa Prajnanananda to give him sannyasa as a final wish. His request was granted. On the auspicious day of December 7, 2004 he received sannyasa. This personal sannyasa was given in a quiet manner to strengthen his personal meditation practice and deepen his relationship with God and gurus. He left his mortal body eight months later on August 20, 2005 at 8:35 am.

In the early 1980s as New York center leader he was entrusted with Baba Hariharanandaji’s care, as well as with guiding Sunday meditation classes and organizing events. The center was small at that time, but he was out there doing the necessary seva (selfless service). Kriyavans in New York fondly remember him plastering the East Village and Soho areas with those now famous huge posters announcing Baba’s visit. Driving around New York City one would see these huge posters of Baba Hariharanandaji smiling everywhere. Under the umbrella of the love for the gurus we have all taken refuge. Swami Divyananda took refuge in the gurus and Baba. Now his refuge is complete. We will remember our friend and brother, Swami Divyananda Giri.