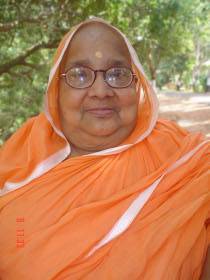 Loving and Divine Souls,
Let the blessings of God and Masters be upon us.

I send my prayer and best wishes to all of you.

I would like to express my deep love and gratitude to all of you for your love and sympathy that you expressed in your letters to me after hearing about the physical departure of Swami Gurupremanandaji, who was destined to be the instrument for bringing me into this world. She was a beautiful mother who took care of my all-round development.

She is a divine mother to me. She is also an inseparable part of my existence. I am praying for her.

I am praying for you all. Please meditate and be divine.

After the passing of Swami Gurupremanandaji on February 5, 2009, her mortal body was taken from Cuttack to Jagatpur Ashram and then onwards to the Balighai ashram, with a stop for darshan at Jagannath Temple in Puri. Upon arriving at Hariharananda Gurukulam, where her body was to be laid to rest, many devotees came to pay their respects and have her last darshan. Her body was then carried in a procession of devotees to Gurudev Paramahamsa Hariharananda's samadhi mandir and then to her samadhi place. The traditional burial ceremony for monks (bhu-samadhi ceremony) was performed under the guidance of Paramahamsa Prajnananandaji in the early evening in the presence of many monks and devotees. There was chanting of the Bhagavad Gita, devotional chanting, and vesper.

On February 20, 2009 there will be a traditional monk celebration at Hariharananda Gurukulam in which many monks will congregate to offer their prayers. In this grand celebration, devotees and villagers in the surrounding areas will also gather to remember Gurupremanandaji's many great contributions. The event will conclude with devotional chanting and feeding of the monks and other guests.

Many people from around the world are asking what they can do, and we humbly request that you pray and meditate.

With deep sadness we announce that Swami Gurupremananda Giri breathed her last breath today, 5th February, 2009 at 1:25 p.m. IST in Cuttack, Orissa, India. During her householder life she gave the world the most beautiful gift, Triloki Dash, who later became Paramahamsa Prajnanananda. She was his model of love and compassion. She always had loving words for everyone, and lovingly embraced all who came to her. Her sparkling eyes and her beautiful smile opened everyone's heart. She always had words of inspiration and encouragement. We will miss her deeply.

Let us pray for her peaceful journey to the Heavenly Father.

“O my children! Be good in your life always: Serve God and sadhus, and be realized.” With these beautiful and tender words of wisdom, Swami Gurupremananda encourages and enlightens all seekers on the path of Truth.

In her pre-monastic days as a householder, wife, and mother of five children, she was known as Smt. Baidehi Dash. We are most grateful to this divine mother for bringing Triloki Dash (now known as Paramahamsa Prajnanananda) into the world. Her worldly duties were performed with the utmost love for God and her family, as she nurtured and cultivated the divine seeds of spiritual aspiration within her children. After taking the vows of sannyasi, she extended that same loving care and inspiration to the entire world family. Throughout her life, Swami Gurupremananda served as a living example of God’s beauty and compassion.

She began practicing Kriya Yoga in the early 1980’s, when she met Gurudev Paramahamsa Hariharananda at the Karar Ashram and became his disciple. After the death of her husband, she went to stay at the Balighai ashram, Hariharananda Gurukulam. In 2007, Paramahamsa Prajnanananda gave her the monk’s initiation and bestowed upon her the name Swami Gurupremananda, which means “love for the guru.”