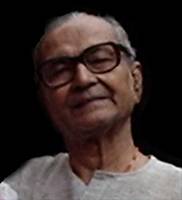 Debi Baba was the Trustee of Karar Ashram in Puri for many years. He was a great supporter of Shri Gurudev's work, both in India and abroad.He hosted Shri Gurudev for an extensive period of time in Kolkata. While Shri Gurudev was staying at Debi Baba’s house on Hazra Road, there were regular Kriya initiations and meditation classes, which were attended by many disciples from India and abroad.

Although Debi Baba was an authorized Acharya to initiate people into Kriya Yoga, he was too humble in this regard. I do not know whether he ever served in his role as an Acharya, but I do know that he rarely guided meditation. He was more actively involved in the printing and publishing of Shri Gurudev's writings in English and Bengali.

I met Debi Baba during my early association with Shri Gurudev, and from then on I spent a lot of time with him and his family. I have felt his love for me ever since I came to the path of Kriya Yoga. His love and care will be ever cherished in my heart and mind.

Debi Baba was in poor health and had been bedridden for a long period of time. The last time we visited him was in the first week of January, 2012.

Let us all pray to God and Shri Gurudev for Debi Baba’s peaceful onward journey, as well as to give strength and peace to all of his family members.