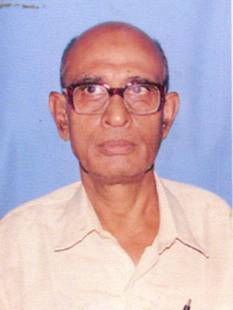 From the age of seven, when he came to live at Gurudev’s ashram in Puri, Santosh Kumar Choudhury was divinely blessed with the loving guidance of his master, Baba Hariharanandaji. He received his childhood academic education from the ashram and the Puri Zila School. From there, he continued his studies and went on to earn a M.A., B. Ed., becoming the Assistant Headmaster of a Higher Secondary Education School.

Yogacharya Santosh Kumar Choudhury was married to Doly Chouhury, and they had two sons, Anjan and Kaushik. On May 27, 2007, the Centenary Day of Beloved Gurudev, he was authorized to teach the Kriya Yoga technique to spiritual aspirants.

He was a humble and devoted advocate of Kriya Yoga. When asked to comment on Kriya Yoga, he repeated the words so often spoken by Baba, “Kriya Yoga is the shortest and easiest way to conceive God.”