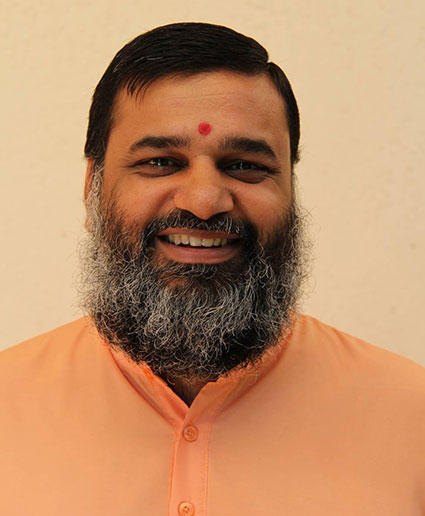 Swami Atmavidyananda Giri, a senior monk in the lineage of Paramahamsa Hariharananda and Paramahamsa Prajnanananda, currently Vice President of Kriya yoga Institute, has been tirelessly teaching Kriya Yoga to sincere seekers since 2004.

Swami Atmavidyananda was born Arvind Joshi in a traditional Brahmin family in 1971, in Bhopal, India. At an early age, the spiritual environment and guidance of his parents nurtured in him a sincere quest for God.

Upon completion of a degree in mechanical engineering, he met Paramahamsa Hariharananda and, with his blessings, was initiated into Kriya Yoga in 1994, at Rourkela Ashram in India. After completing his professional responsibilities, in 2002, he dedicated his life full-time to the cause of spiritual practice and joined the Hariharananda Gurukulam, Balighai under the auspices of Paramahamsa Prajnanananda.

Under the directions of his Master, Paramahamsa Prajnanananda, he traveled outside India in 2006 to teach Kriya Yoga in the west. Since then he has traveled extensively in North America, South America, Europe, Australia, New Zealand, and Asia to guide seekers on the path of Kriya Yoga. He has also participated in and presided over a number of interfaith conferences, and delivered a number of lectures, and television and radio talks on spiritual topics in the USA, Canada, and South America. Swamiji’s calm demeanor and beautiful voice charm his audiences in the very first meeting itself. He provides loving instructions in a very logical and clear manner. He can speak 6 languages and his desire to constantly pick up more languages and be able to talk to the people in their own language has endeared him to people in different parts of the world.

He was ordained as a monk in the Giri monastic order in February 2009 and given the name Swami Atmavidyananda, which means 'bliss of Self-knowledge'. While primarily dedicated to the cause of Kriya Yoga, he is also an expert in astrology, eastern and western scriptures, other ancient yogic practices, and Vedic ritual ceremonies. As a resident monk of the Kriya Yoga Institute, he resides in the Kriya Dhyana Mandir (Temple of Meditation), Monroe, WA.