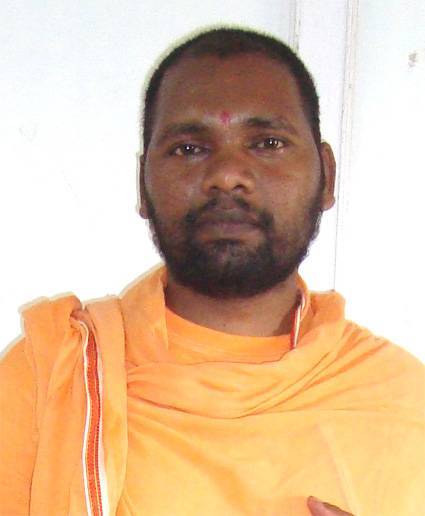 In 1977, Sadhu Haibru was born into a very devout and humble family in the small hamlet of Sapuapada, in the foothills of Gadoodi in Jajpur District of Orissa, India. While growing up, his mother lovingly served and cared for the many monks that were welcomed into their home. It was Sadhu’s good fortune to be a recipient of the blessings that came from these monks, as a result of his mother’s kindness and generosity. Little did his mother know that years later her little Sadhu would one day become a sadhu (monk).

When his mother became ill, he made the decision to leave school and seek employment so he could pay for her medications. A few years later, after his mother passed away, Sadhu left his home and moved to Cuttack. He had often heard stories of the Jagatpur Ashram, which is located there, and planned a visit shortly after his arrival.

Upon reaching the ashram, Sadhu felt an immediate attraction to ashram life. After this visit, he still maintained his job in the city; however, the rest of his time was dedicated to serving God and masters at the ashram. Then, one day a Swami at the ashram took him to visit Hariharananda Gurukulam, the ashram in Balaghai, and the famous Jagannath Temple. This experience ignited the flame of divine love in his heart, soon after he left his job in the city to serve in Jagatpur Ashram fulltime. Sadhu worked very hard in the ashram, tending to whatever was needed, often not even taking the time to rest. Then three years later he was initiated into Kriya Yoga by his spiritual preceptor, Paramahamsa Prajnanananda, and continued living and serving and meditating in the ashram.

In 2002, upon the advice of his master he underwent the Residential Brahmachari Training Course at Hariharananda Gurukulam. In February of 2004, he was initiated into naishtika brahmacharya and given the name Brahmachari Sevananda, which means 'the bliss of serving.'  Five years later, on the auspicious Shivaratri, Brahmachari Sevananda was initiated into monkhood by his master and given the name of Swami Gurusevananda Giri, which means “one who is absorbed in the bliss of loving service to the guru.”  Blessed with a sweet, meek, and humble nature, Swamiji continues to serve his master in the many different Kriya Yoga ashrams throughout India.