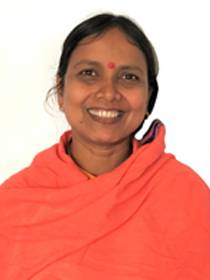 Swami Gurusharanananda Giri was born Tapaswini Dash to a very spiritual family. She grew up surrounded by her family and loving community in a village near Pattamundai, Odisha. She attended Utkal University in Bhubaneswar, Odisha and graduated with a degree in science.

When she was 21 Tapaswini attended the First Residential Bramachari Training Course in 2002.

In 2004 her opportunity to live ashram life and serve her masters came when her guru, Paramahamsa Prajnanananda, asked her to join the new Hariharananda Balashram where she joyfully served from 2004 to 2017.

In 2009 Tapaswini was initiated into brahmacharya and given the name Dhyanamayee. It was after that, following the instructions of Paramahamsaji, that she began traveling to the West. In 2009 and 2010 she visited many countries in Europe participating in Kriya Yoga programs and visiting European ashrams and Kriya Yoga centers.

In 2012, following tradition, she was initiated into sannyasa by Paramahamsaji and given the name Swami Gurusharanananda Giri.

In 2017 she moved to the United States and is stationed at the Temple of Compassion ashram in Texas.