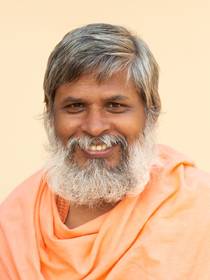 Pramod Kumar Behera was born in 1970, in the village of Hemantpatana, in the Nayagrath District of Orissa, India. He was raised in the nurturing atmosphere of his industrious and pious parents; this provided him with a strong moral character and a firm spiritual foundation on which to build his life. As a young boy, his parents taught him the importance of making the best use of his time and learning all the necessary skills to become a happy, efficient, and productive member of the community. These simple lessons made a deep impression on Pramod and, through lifelong practice, he has understood their wisdom.

While pursuing his college degree, he came into contact with Shri Triloki Dash (now known as Paramahamsa Prajnanananda), who was, at that time, a lecturer of Economics at the school he was attending. Little did he know how that momentous meeting would impact his life.

After obtaining his Master’s degree in the Oriya language, he entered law school. Profoundly influenced by Mother Teresa, it was Pramod’s wish to serve those afflicted with leprosy. Hoping to raise funds for this noble cause, he met with Paramahamsa Prajnanananda at the Jagatpur Ashram. This was a pivotal turning point in his life. Instead of returning to the world to serve a small facet of mankind, he decided to remain at the ashram and dedicate his life to serving the entire humanity. Pramod took Kriya Yoga initiation from his master in February 2000. Then, in February 2004, he was initiated into naishtika brahmacharya and given the name Brahmachari Nityananda, which means “constant bliss.”

Five years later, on the auspicious Shivaratri (23 February 2009), he received the monk’s initiation and was given the new name Swami Nityapremanandaji, which means “one who is absorbed in the bliss of eternal love.” He is currently serving his master while working in the Kriya Yoga publications division, translating English works into the Oriya language, and compiling articles for Tarane Nauka (the quarterly magazine written in the Oriya language). Swami Nityapremananda Giri also travels to many different centers, guiding meditations and conducting Kriya programs.