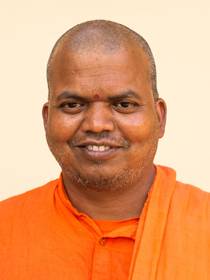 Swami Paripurnananda Giri was born and raised in a traditional Indian family in the lush green hamlet of Kesula Gopalpur, in the Cuttack District of Orissa, India.  The natural inclination to tread the spiritual path was first nurtured by his mother and, in later years, encouraged by his school teachers.  While pursuing his degree in engineering, he met Paramahamsa Hariharananda at the Jagatpur Ashram in 1995. After meeting this great master, his quest for God was intensified and, about a year later, he was initiated into Kriya Yoga at the Rourkela Ashram.  In 1996 he had the opportunity to practice Kriya Yoga meditation in the holy company of Paramahamsa Hariharananda at the Rourkela Ashram. Filled with inspiration, he returned to worldly life and, with even greater determination, he continued in his practice of Kriya Yoga meditation, while pursuing his service in an Indian Public Sector at Rourkela.

Years later, he quit his job and underwent training in the first Residential Brahmachari Training Course in Hariharananda Gurukulam, in the year 2002.  There he spent time studying Sanskrit and scriptures, under the direct guidance of Paramahamsa Prajnanananda and other senior monks. Upon completion of the training course, he remained at Hariharananda Gurukulam, becoming a resident brahmachari. This decision allotted him the opportunity to dive, yet even deeper, into the vast ocean of Kriya Yoga mediation and the study of holy scriptures. Swami Paripurnananda thrived in the spiritually vibrant atmosphere of Hariharananda Gurukulam, while in the constant company of many monks and spiritual scholars, who are drawn by the holy environment of this ashram.

On the 18th of February, 2004, he was initiated into naishtika brahmacharya by his preceptor, Paramahamsa Prajnanananda. He had the rare opportunity to serve his master during the centenary celebrations of Paramahamsa Hariharananda, from 2006 to 2007. On February 23, 2009, he was initiated into monkhood, by Paramahamsa Prajnanananda, and given the name of Swami Paripurnananda Giri, which means ‘one who is absorbed in the bliss of completeness.’  Currently he is serving his master in the different ashrams and centers of India, organizing Kriya Yoga programs, guiding meditations, and teaching the technique of Kriya Yoga meditation to all who come in search of Truth.