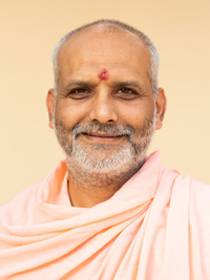 Swami Prabuddhanandaji a seeker of truth from a young age, got initiated into Monasticism in 2012 by Guruji Paramahamsa Prajnananandaji, and is blessed a name best suitable of his attitude of the inner query. Prabuddhananda means one who rejoices in realization. Swamiji rejoices in finding the inner essence of life through observation.

Swamiji is based in Kriya Vedanta Gurukulam, the monastery in Joliet, IL