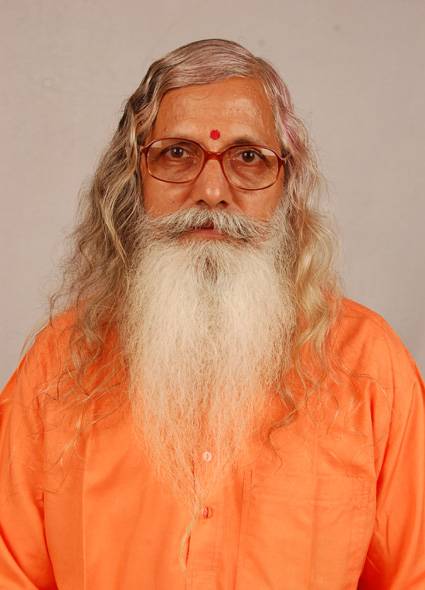 Before taking his monastic vows, Swami Samarpanananda was known as Suresh Chandra Mishra. Swamiji is a former professor of Political Science who was popular and well respected among his students and his peers alike in a number of schools and colleges in Odisha. His unique way of teaching and excellent command over the subject matter amazed many minds during his tenure. While a professor, he was sought out as an extemporaneous speaker, and even today he astonishes his listeners by way of his sheer intelligence. From early childhood he was a brahmachari; living an austere and disciplined life. It was only after fulfilling all his duties towards his family ― mother, father, brothers, and sisters ― that he embraced monastic life.

Swamiji met his beloved Gurudev Paramahamsa Hariharanandaji in 1982, and was subsequently initiated into Kriya Yoga. Thereafter, he practiced Kriya Yoga with awareness and strict discipline, the principles he had applied throughout his life. However, it was his deep desire for renunciation and his longing to serve society, especially the youth, that brought him to Hariharananda Gurukulam in Balighai, near Puri in Odisha. In 2004, he was initiated into the monastic order by His Holiness Paramahamsa Prajnananandaji and was thus given the name Swami Samarpanananda Giri. As the name indicates, he has devoted his entire life to guiding others on the path of spiritual enlightenment. Hence he has traversed the length and breadth of India many times, spreading the message of his masters and coordinating and conducting Kriya Yoga programs in India and abroad. He is a firm believer in the path of love and devotion, truthfulness and honesty, and love for mother, motherland, and humankind.

Swamiji currently resides in Hariharananda Gurukulam as the Vice President of Prajnana Mission. Prior to that, he served as Secretary of Prajnana Mission from 2006 until 2011, and was also Vice President of Hariharananda Kriya Yoga Mission at Sambalpur. Additionally he is actively associated with the management of Yuktashram at Bhisindipur and Hariharananda Balashram at Arua. Swami Samarpanananda frequently travels around the globe, visiting Europe, United Kingdom, United States, Australia, New Zealand, Malaysia, United Arab Emirates, as well as other countries, guiding and assisting the students of Kriya Yoga, inspiring all seekers to follow the spiritual path of meditation and love.