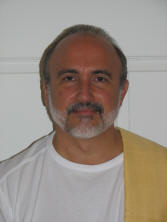 Yogacharya John Thomas Lopategui was born in Brooklyn, New York, and lived in Brazil for many years. In 1978, in New York, he was blessed with  initiation into Kriya Yoga by Paramahamsa Hariharananda, his beloved Gurudev who changed and redirected his life.

Years later, in 1998, while living in Brasilia, Brazil, he was guided by Baba Hariharanandaji to organize the first program of Paramahamsa Prajnanananda to introduce Kriya Yoga to Brazil. With his wife and kriyavan, Marilena Ma, they founded the first Kriya Yoga center in Brasília that year and, in 2000, the second center in São Paulo.

He was the center leader in Brasilia from 1998 to 2001, when, following Gurudev's recommendation, he moved his family to Miami to be close to Baba in the last critical years of his life.

In 2003, he was asked to serve as a member of the Board of Directors of the Kriya Yoga Institute and continues in this capacity until the present.

In May 2007 in India, on the auspicious occasion commemorating 100 years of Gurudev’s birth Paramahamsa Prajnanananda named him Yogacharya with authorization to initiate and teach Kriya Yoga to sincere seekers.

Returning to São Paulo, Brazil in 2019 he currently serves as Yogacharya and member of the National Council of Kriya Yoga in Brazil.