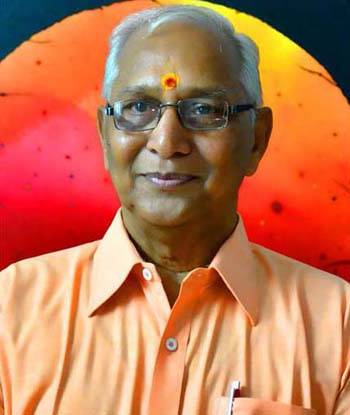 In 1979, Shri Krishna Rao Daund came to the divine path of Kriya Yoga. After faithfully practicing this blessed technique for many years, in 1994, by the loving grace of Gurudev Paramahamsa Hariharanandaji, he was given initiation into second Kriya. Thereafter, he received further initiations into higher Kriyas from Guruji Paramahamsa Prajnananandaji.

Initially Krishna Rao Daund came to Paramahamsa Hariharanandaji seeking to learn Cosmic Astrology; however, upon meeting the divine sage, he realized he had indeed met someone who could truly guide him on the path of Self-realization and Truth. Later, his entire family, including his wife, sons, and daughters, took initiation into Kriya Yoga. Throughout his life he has led many people to the royal path of Kriya Yoga, the divine panacea for human suffering. As a result of his diligence and ceaseless effort in mastering this divine technique, Guruji thus authorized him to be a yogacharya in December 2011.

It fills Krishna Rao Daund’s heart with joy to see how our revered Guruji Paramahamsa Prajnananandaji is carrying forward his beloved Master’s work so flawlessly. He recalls that we all bear the seeds of Gurudev’s teaching; in fact we all belong to him, and Gurudev evolves through all of us. Krishnarao Daund is actively engaged in helping friends and families develop their personalities and follow the path of Self-realization, yoga, and meditation for the purpose of self-evolution.

Krishna Rao Daund has been the center leader of the Kriya Yoga Center at Bhopal since 1996. He humbly performs this task, with deepest love for God and Gurus. There are two important teachings of Gurudev that he wishes to share with all: (1) you should be master of yourself and (2) you are initiated in Kriya Yoga not just to be a disciple, you should strive to become a guru in your own lineage.