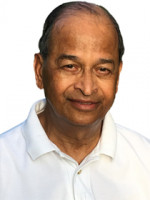 Yogacharya Suresh Kodolikar lives with his wife, Niva, and two daughters, Neeyata and Samata, in Millsboro, Delaware. He worked as an architect and has a Masters in Architecture from the Catholic University of America.

Yogacharya Suresh Kololikar received Gurudev's initiation in 1975 in New York and was authorized to initiate by Baba Hariharananda in 1980. He has served as the leader of the Ellicott City center since 1977 and is a member of the board of directors of the Institute of Kriya Yoga since 2004.

He travels teaching Kriya and initiating students across the United States, as his schedule allows. He believes that his more than thirty years of practice help him to lead his life in a peaceful and harmonious way, also allowing him to have a deep understanding of life's situations, with a certain degree of compassionate detachment.
Upcoming Events
Mother Center Foundation Day Retreat Retreat - Kriya Yoga Institute, Homestead, FL, USA
×